In forest monasteries it’s normal for the daily routine to be periodically changed, often with no warning. For weeks on end the sound of the bell will resonate throughout the monastery every morning and evening, calling the monks, novices and lay-guests to gather for chanting and meditation. Then, all of a sudden, it will stop, and the residents will be left to meditate by themselves, forced back upon their powers of self-discipline (as well as their ability to not hit the snooze button). And so as we approach the end of the Rains Retreat all morning sittings at the Hermitage have been postponed, and, apart from the Monday, Wednesday and Friday open evenings, so have the evening meetings.

Two weeks ago, on Saturday 30th August, we hosted an Angulimala workshop, when Buddhist prison chaplains from all over the country gathered for meetings and to collect supplies. Taking Buddhism into the prisons can be demanding work (not usually because of the prisoners, I should add) and these occasions provide a nourishing atmosphere of support and understanding.

On the following day, Cormac, from Northern Ireland, took Anagarika ordination, thus taking his first major step on the path to becoming a monk. He joins Tobias as a white-robed postulant, and as they are both a staggering 6’6” tall we now have two precocious fruit pickers to help collect the Hermitage’s vast quantities of blackberries, apples, plums and damsons, as they make their way into one of Sister Khema’s crumbles. There are still many blackberries to be picked so if you’d like to lend a hand let us know.

Luang Por’s recent morning talks to the community have been focussed largely on the 75 Sekhiya rules, which apply to both monks and novices, and which anagarikas and nuns are also encouraged to observe. The Sekhiyas are minor but important precepts governing the way we eat, behave in public, and teach the Dhamma. In connection with these rules we’re often reminded of the Venerable Assaji, who, by his composed and restrained manner while collecting alms-food in a village, inspired Sariputta to approach and question him. Assaji gave a very brief summary of the Buddha’s teachings – but enough for Sariputta to reach the first stage of Enlightenment – and then directed Sariputta to the Buddha himself. When explaining the Sekhiyas concerning teaching the Dhamma, Luang Por drew our attention to their underlying principle, which is to ensure that the listener is in a respectful, receptive state of mind and so able to absorb the teachings for maximum benefit.

In his public evening Dhamma Talks Luang Por has been pressing home the need to stabilise the mind during meditation. Watching and investigating our experiences occupies a central part of the development of wisdom, but without a firm foundation in concentration we make little headway on our quest to understanding. In the same vein he also narrated a sutta where the Buddha lists five things that lead to the decline of Buddhism. These are: lack of respect for the Buddha, the Dhamma, the Sangha, the Training, and Samadhi (the practice of concentration).

In one of his Dhamma talks during the last two weeks Ajahn Manapo spoke of the need to remind ourselves of the purpose of mindfulness. The Buddha would compare mindfulness to the probe used by a physician to investigate a wound in order to locate the poison. The probe, the Buddha said, is like mindfulness; the wound, our experiences; and the poison, ignorance. So mindfulness is that which investigates experiences – from our thoughts and feelings, to sights and sounds – in order to remove ignorance and see their true nature. It is much more than simply being here and now (though that is certainly a part of it); it is the key to unlocking the truth of our existence and freeing our minds from all greed, hatred and delusion. Ajahn Manapo has also been to visit the Banbury group, and will be seeing them again at Bhavana Dhamma next Tuesday evening to talk about Right Effort.

Last Sunday was another big day for us. Khun Peter, who recently retired from the restaurant business, brought up a coach-load from London. With about forty people, a marquee full of piping hot Thai food, and the practice of giving (offering food to the monks), morality (taking the Refuges and Precepts) and mental cultivation (listening to a talk) it was a bit like a mini festival. It was a great day and a lot of money was raised, so well done to Khun Peter for organising everything. It is likely that this will become a monthly event, taking the place of Luang Por’s visits to London that used to happen on the first Sunday of every month. You are always welcome to bring food on any Sunday (or on any other day for that matter), but these occasions will be particularly suitable for introducing you to the practice of giving alms-food to the monks. And, for those of you who are new to Buddhism but are considering making a stronger commitment, you would also have the opportunity to observe, and perhaps join in with, people taking the Refuges and Precepts. And, if you needed any more persuasion, there’s the rather fine Thai cuisine…

Luke, Luang Por’s devoted driver, took some time off the week before last for a well-deserved holiday. Yet again Khun Peter came to the rescue and stepped into Luke’s shoes. We’re also very grateful to Tom, who used to be a novice here, for lending his time and expertise. Over the next few weeks you should notice evidence of his landscaping skills at work in the grounds. And our master builder, Andy, has just installed a new waste-pipe from the back toilet, so you can look forward to using the facilities without it sounding like a machine gun is going off every time you flush.

And finally, expressing his appreciation for the training he received as a drama student (a training which led to his interest in Buddhism), and doing his duty to an old teacher, last Friday Luang Por travelled to London to meet up with Christopher Fettes in order to discuss recording the unusual circumstances that surrounded the founding of Drama Centre, London. They were joined by Simon Callow, a more recent student of Drama Centre who also used to sell the tickets to the shows in which Luang Por appeared during his time at the National Theatre in the Sixties. 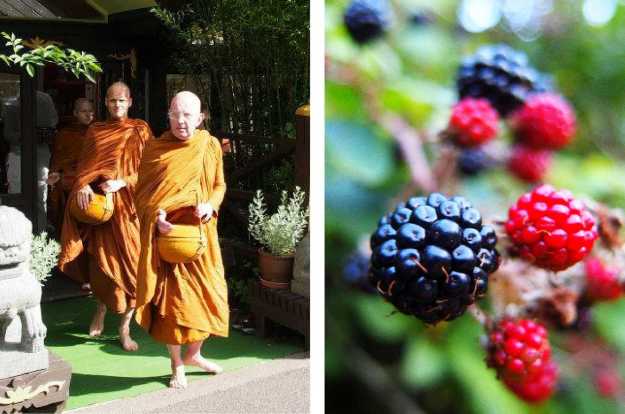