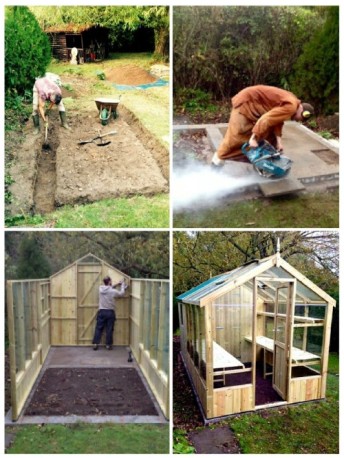 Back in the summer of 2006 we built, with a lot help from the Warwick University Buddhist Society, the log cabin shrine room at Bhavana Dhamma. But before we were able to do that we had to relocate, very carefully, the old timber-framed greenhouse. As you can imagine, it was a delicate operation. Well, after eight years and many a cracked window and sagging roof beam later, we recently decided that it had to go, and so we dismantled it and prepared a new, solid foundation for its replacement. After several weeks of waiting for it to be manufactured, last Friday a lorry arrived and three young men with Sheffield accents erected our new greenhouse/shed combination. It’s a very handsome and practical building and we hope to see lettuces and lupins flourishing next Spring.

Our End of Rains Retreat celebration on October 12th went very well. We didn’t get a precise head count but it looks as though at least 200 people attended – that’s about 195 more than are usually here! Khun Peter came up with two coach-loads from London, there was another coach from Warwick Uni, and then there was the usual procession of cars from far and near, including Khun Nee with a group from Bradford-on-Avon.

After the taking of the Refuges and Precepts and the alms-round and meal, an offering of robes and requisites was made. Then Luang Por, Ajahn Manapo and Sister Khema were invited to give Dhamma Talks. Luangpor reminded everyone that teaching the Dhamma is one of our ways of giving something back to those who so generously support us. He also spoke of the importance of keeping the precepts – especially the fifth, the breaking of which easily leads to the breaking of the rest. And he should know: a high percentage of people he sees in prison are there because of alcohol and drug-related crimes.

The event was concluded by Khun Peter leading the lay-community in asking forgiveness of the Sangha. This is something that we monks do among ourselves during the Rains, and also whenever we leave a monastery after having stayed there for some time. It’s a powerful, humbling practice that clears the air and helps to maintain unity and concord – two qualities that the Buddha praised again and again. All in all it was a great day and over £4,600 was raised. Anumodana and well done to all who took part.

(Khun Peter and his group from London.)

Last Thursday Luang Por and Ajahn Manapo paid a visit to The Orchard, a charming retreat house nestled in the shadows of the Black Mountains on our side of the Welsh border. It’s run by Ad Brugman, a student of an old friend of Luang Por’s called John Garrie (whose pair of golden cranes sit beside the main Buddha rupa in our field – you can see one in the photo at the top). Although John passed away almost twenty years ago, Luang Por has maintained contact with a number of his students, including Ad and, until she passed away last year, his wife, Sonia. It’s because of this long-standing connection that we were recently contacted by Ad who informed us that he has named the Buddha-Dhamma Fellowship as beneficiaries of the Orchard once he has passed away. He has also invited us to begin using it more or less straight away as a venue to hold retreats. The Orchard is a wonderfully neat and secluded place, with far reaching views towards the Black Mountains, and has enormous potential. And it’s also clear that the standard of practice there is excellent, as Luang Por explained in his Dhamma talk the following night…

‘If you want to know how good the practice is, look how clean the monastery’s toilets are.’ So said Ajahn Chah, and it’s a measuring stick that we continue to use. And the Orchard, according to Luang Por (though it’s not a monastery) passed that test admirably. If a toilet – that place which is most likely to be overlooked, neglected and dirty – is in fact immaculate, then that speaks volumes about the resident’s state of mind. Attention to detail, mindfulness and awareness, the practice of concentration – if we can maintain them even while cleaning a toilet, then we are practising well.

As it’s the beginning of the new academic year, Luang Por is back at Warwick University every Monday evening to lead the Buddhist Society’s meditation session. So far the turn outs have been very pleasing, with between 30 and 40 people attending. As far as prison work goes, two weeks ago Luang Por spent the afternoon at Lambeth Palace to witness the licensing of Mike Kavanagh as he became the Prison Service’s new Chaplain General. So the Archbishop of Canterbury now finds himself in a photo with Luang Por…

In one of his recent Dhamma talks Ajahn Manapo spoke of the importance of developing mindfulness of the body, and in particular that pure, precise awareness of what the body is doing right now. Mindfulness of the body is like an anchor: without it, our minds are blown from one state of suffering to another – from greed to anger, from depression to restlessness. But once we have that anchor firmly embedded, then we remain focussed and composed, and less likely to be led astray by mental proliferation. There are various techniques that we can use to generate a firm awareness of the body: we can do things silently (try putting the drinking glasses in the cupboard without making a sound); we can do things slowly; we can just stop what we are doing from time to time and allow the momentum of our cravings to fizzle out; and we can of course take a minute or two during a busy period to focus on the breath.

Ajahn Manapo is also getting back into school visit mode. He’s received a number of classes from local schools recently and next week he’ll be taking an assembly each afternoon at Henley-in-Arden High School.

Andy is very close to completing our renovation project. Now all we have to do is pay for it! So

far we’ve received almost £16,000 in donations towards the appeal. We’re not yet sure what the final cost will be, but it will probably be at least double that amount. The water system is up and running, which means decent water pressure and an almost constant supply of hot water even though the boiler is on for two short periods each day. The replacement of the water system in particular has been complicated and time consuming, with two new pumps having been installed in our very deep well, a new hot water tank in the airing cupboard, and a pressure vessel and filter in the ground behind the shrine room (pictured). But it’s been worth it and we are very happy with the result. Well done and thank you to everyone who has contributed so far, and to Andy for being the peerless builder that he is.

And finally, we have now installed five under-rug heating mats in the shrine room, which are proving to be very successful. The trouble with most forms of heating is that all the warmth gets trapped up in the ceiling, and as we spend our time sitting cross-legged on the floor we end up with cold bodies and heads stuck in a cloud of warm, stuffy air – no good for meditators! But with the subtle (and economical) heat which these mats provide we can be comfortable and, what’s more, able to breathe our lovely, cool, Warwickshire air.