If you happened to have clicked onto the home page of the Huffington Post on the afternoon of Tuesday 25 November, and you weren’t prepared to see a huge photo of Luang Por dominating the headlines, you would probably have had quite a shock. No – he didn’t scoop the EuroMillions jackpot. ‘From the Stage to Sage’ ran the headline, and beneath that was a photo of him perched on his seat in our conservatory, surrounded by the familiar assemblage of model tortoises, skeletons, money trees and Buddha images.

So what, you might ask, was he doing there?

Well, several weeks ago he was approached by a young journalist called Louise who was keen to pen an article on his life-story. It was to be part of their ‘Beyond Belief’ series which chronicles the lives of British people who have used their religious and spiritual paths to create, as they put it, a force for change, She was particularly interested in his prison work and was also curious about his transformation from actor at the National Theatre to penniless Buddhist monk.

So a date was set and she eventually arrived complete with Biro, notepad, and Dictaphone. During those two hours they covered everything from Luang Por’s conventional Christian upbringing, to his part in a London drama school revolution, to turning down Laurence Olivier’s home-made punch, to travelling overland to Thailand and eventually ordaining with Ajahn Chah. And of course there was his prison work to discuss. Two hours later, and after taking several photographs with her phone, she gathered her things, called a taxi, and was off.

The following week she contacted us to say that the article was online. We logged on and – low and behold – it was headline news! But there you have it: from the stage to sage to the front page. You can read it here.

On the 10th November we were fortunate to receive a visit from Venerable Lokanata, a Burmese monk who once lived here but who hasn’t been back for almost 25 years. Some of our older supporters will no doubt remember him, and those who met him for the first time the other day will certainly not forget him. Lokanata’s warmth and cheerfulness were captivating, as was his humility: even though he is now very senior, he instinctively fell into attending to Luang Por – carrying his bag out to the car as Luang Por left for a prison, and so on. It was inspiring to see. It’s taken Lokanata so long to return because he’s been staying at various monasteries around the globe, including ones in Texas and, would you believe it, Jamaica. Then, about two years ago, he was invited to London and he’s been staying there in a Burmese temple ever since. We hope it won’t be another 25 years before we see him again.

On Sunday 7 December Khun Peter’s London group came up by coach. As you are hopefully aware, Luang Por’s visits to the restaurant in London have stopped and instead they are coming here on the first Sunday of every month – unless there is a festival close to that time, in which case they’ll come to that instead. Khun Peter has retired from the restaurant business and now intends to devote much of his time to the study and practise of the Dhamma. These monthly visits, which have become a bit of an institution, are all down to him, and we are so grateful for his generosity and dedication to this place and to the Dhamma. I should point out that these occasions are open to all.

That day, after everyone had taken the precepts, offered food to us monks, and then eaten, we all gathered in the shrine room for offerings and a Dhamma talk from Luang Por. He began by saying that even though humans may be of different nationalities, and speak different languages and observe different customs, we all have one thing in common, and that is suffering. We are all born, we age, get sick and die. We all suffer from the poisons of greed, aversion and delusion. And the Buddha’s teachings are here to address just this problem. The Dhamma does not focus on things that we cannot know. It does not instruct us to dwell on things for which there is no proof. It calls upon us to look carefully at our experiences: our greed and our aversion, and to understand why they arise. If we can do this then we will move that little bit closer to letting them go.

Luang Por and the London Group

Luang Por concluded by talking about his commitment to maintaining this little beacon of truth and virtue that is the Forest Hermitage. Just before he left for Thailand in 1971 one of Luang Por’s teachers at the time, Kapilavaddho of the Hampstead Vihara, told him that he must one day return to the UK. Others who had gone to ordain would stay in Thailand, Kapilavaddho had reckoned, but Luang Por was to return. And so, considering how much he had benefited from those pioneers who strove to make Buddhism available in this country and wanting to give something back, he did.

Now it’s easy to start a place like this, Luang Por said, as to begin with there’s a mass of enthusiasm and everyone’s eager to help: a bit of painting here or a spot of cooking there; but as time goes on keeping a monastery going proves to be rather more difficult, especially in this country where few people are Buddhist. But keep going we must, and Luang Por expressed his appreciation for the support and generosity given by so many people that enables us to provide this refuge where the Buddha’s Teachings can be taught and practised.

Two weeks ago we hosted the last quarterly Angulimala workshop of the year. It’s usually the least well attended meeting of the four, but this one saw a good turnout, partly because Luang Por had managed to secure a visit from Helen Dearnley, an advisor for Prison Service Chaplaincy Headquarters. It’s her job to go around the prisons ensuring that the Chaplaincies are doing as they should, and she spoke a little about her experience doing this before fielding questions. Another draw was the 2015 Angulimala Calendar, 1,000 of which had just arrived fresh from the printers (and we’ve just ordered another 500). Most of these were taken on the day, and the rest have been collected by individual chaplains or sent to them in the post.

On the subject of calendars, if you would like a Forest Hermitage one, please let us know and we will send you a copy. Alternatively, we will be happy to give you one when you are next here.

During November Ajahn Manapo was kept busy visiting schools. It’s not usual for him to risk his neck in the unforgiving hallways of secondary schools, but a few months ago he was asked if he might lead an assembly each day for a week at Henley in Arden High School. So, it was with a little trepidation that he accepted the offer, and on a drizzly Monday afternoon in mid-November he went along. But he needn’t have donned his bullet-proof robe as the week turned out to be a great success.

He spoke to a different year each day, beginning with the oldest group: 150 16 year olds. As it was likely that this group would be most interested in his reasons for becoming a monk, he based his brief talk on that. Afterwards he led them in a short meditation (which went surprisingly well), and took questions (which were fairly sensible apart from the first: ‘Can you float?’ ‘No’ was the answer to that). The whole thing lasted about twenty minutes. Walking away from that first assembly he wasn’t sure how successful it had been, but his doubts proved to be unfounded when on the following day the teacher reported to him how well it had been received. Many children were now questioning their own values, she had said, and one girl had even expressed her interest in becoming a nun! We’ll be having concerned parents on the phone soon!

In one of his recent talks to the Banbury Buddhist Group, Ajahn Manapo delved into the term mindfulness, and in particular how it is defined in Buddhist teaching, a matter which is of great importance as its now widespread usage is draining the word of its original meaning. As Buddhism has come West we have quite rightly translated most of the key Buddhist terms into English. But there are some which we feel should sometimes be left in the Pali because we have no adequate English alternative. An example of this would be dukkha (often rendered as suffering, unsatisfactoriness, stress, etc.); all Buddhists are familiar with this term, and by using the original we are able to preserve its different shades of meaning.

Although the word mindfulness has served us well since it was utilized by Western Buddhist scholars about a century ago, many of us are becoming increasingly concerned that as it enters the mainstream it is becoming less and less recognisable as that which the Buddha taught. One of the most disturbing examples of this aberration is MMFT – Mindfulness-based Mind Fitness Training – a course to help American soldiers function in high-stress situations – in other words, while they’re shooting someone! And so, with a wish to preserve the integrity of Right Mindfulness, and to dissociate ourselves from the likes of MMFT, perhaps it will soon be time to drop the word altogether and return to the original Pali word, which is Sati. 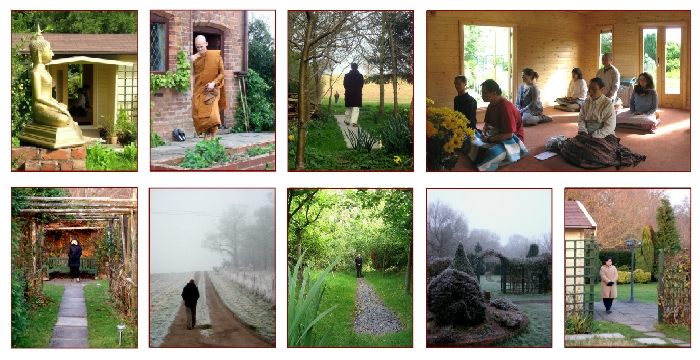 On a far more positive note we are very pleased to announce that the Bhavana Dhamma Retreats will be starting up again next year. Ajahn Manapo used to lead one a month from 2006 until he left for Thailand in 2011, but even though he returned almost two years ago we didn’t get around to reinstating them. Most of the retreats will be a weekend in length, with a longer Easter retreat, a seven day retreat in August, and a five day retreat over the new year. You will find the schedule and retreat information here, as well as a new and efficient online booking form. If you’re interested in attending one be aware that spaces are limited to about nine.

As January approaches Luang Por and Ajahn Manapo are gearing up for their annual trip to Thailand to attend the Ajahn Chah memorial day on January 16th. Luang Por will depart on Tuesday 13th January, enabling him to lead the first Warwick University Buddhist Group meeting of the new year on Monday 12th. He will then return on Tuesday 3rd February. Ajahn Manapo will head off on the 30th December, giving him a couple of weeks before he meets up with Luang Por. Ajahn Manapo will return on 29th January, in time to lead the Warwick Uni group on the following Monday. While they are both absent the Monday, Wednesday and Friday evening meditation sessions will continue as normal, and an audio CD with chanting, guidance and a talk will be played.

As usual we will be holding our special New Year’s Eve meditation here at the Hermitage. The evening will begin at 8 pm with chanting, meditation and a Dhamma Talk. Tea will then be served and there’ll be a chance to talk to Luang Por. About 30 minutes before midnight everyone will gather again in the Shrine Room to meditate the new year in. Then, as the clock strikes twelve, those present will be invited to approach the shrine one by one to light a stick of incense, all the while determining to let go of all that has happened in 2014 and to make the most of the year that awaits. If you have no commitments that evening, please join us.

And finally we would like to wish you all a Happy New Year.