(To receive this newsletter by email, please fill in the form in the sidebar)

The recent unusual spell of mild, clear weather thankfully held on until yesterday morning, meaning that Sunday’s annual Buddha Grove celebration at Springhill Prison went smoothly. Ajahn Amaro and three other monks from Amaravati joined us, as did four monks from Wat Santiwongsaram in Birmingham and two monks from the temple in Oxford. We began the evening with a short puja in front of the prison shrine (pictured below), before hearing speeches from governors past and present, a transformed ex-inmate called Tom, and finally Luangpor.

Luangpor told the story of how this unique space came to be, and reminded us of Sam Cutler’s wish for it to provide a ‘Buddha Field’ of wholesome energy that might affect the whole prison for the better. Incidentally, Sam, who was the brain of the operation, was the former road-manager for the Rolling Stones
.

Khun Peter and co. took over the prison kitchen for the afternoon and ensured that inmates, staff and guests (excluding the monks, of course) had their bellies filled with warm, tantalising Thai grub. After that we all made our way back outside for the candlelit procession around the grove. To cap it off, presentations were made to deserving recipients. Sadly, Lord Avebury, who has been a stalwart of these events since the beginning, was not able to be there because of ill-health. 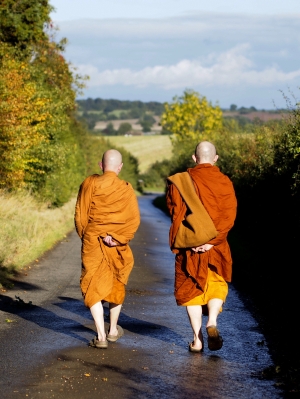 Yesterday Ajahn Amaro and a contingent of monks from Amaravati came to formally pay their respects to Luangpor. It’s custom in our tradition for groups of monks to visit the elders of the Sangha during the Rains Retreat to ‘ask for forgiveness’. It’s not that we tend to upset each other very often; this ceremony is simply a way to promote harmony, concord and good-will between us all.
.
After spending some time in the shrine room at the Hermitage, we walked around the grounds and then headed over to Bhavana Dhamma, where Maureen and Sister Bodhi – our new 8-precept nun – brewed up some tea. All in all it was a very pleasant afternoon.
.
Teaching

In addition to his usual round of prison visits during the last two weeks, Luangpor ventured a little further afield to HMP Usk in South Wales. He also had a couple of engagements in London, one of which concerned recording some suttas for an audio book.

Doing things a little differently in his recent Dhamma talks, Luangpor has taken to reading a text from the Pali Canon before commenting on it. Just the other day he narrated the account of the Buddha advising Rahula on the importance of not lying. The Buddha demonstrates his point with the vivid analogy of the water pitcher and eventually states that a person who feels no shame when telling a deliberate lie is not only empty of virtue but incapable of developing it.

Ajahn Manapo’s week included visiting the Banbury Buddhist Group to lead a meditation and give a talk. As their current theme is concerned with deepening the practice, he spoke about the importance of determination and how best to go about cultivating it.
.
On Thursday he paid a visit to Lillington Primary School, which lies on the outskirts of Leamington, to hold a short assembly. Time was limited but he managed to give the children a brief outline of the Buddha’s life before moving on to speak about the three classes of good actions: giving, morality and meditation (dana, sila, bhavana). After that he led the c. 250 kids in a guided meditation, which, judging by their responses (‘I feel happy! Refreshed! Relaxed!, etc.), was a great success.
.
And the Sunday before that he also hosted our first Sunday School Class in many years. The next one will take place on 11th October at 12:30 pm.
.

Over the weekend we had a group staying at Bhavana Dhamma for the monthly weekend retreat. Many thanks to Benyapa for cooking, and to Simret for providing some lovely dishes. Ajahn Manapo’s talks were centred upon loving-kindness, and particularly on the need to develop it for that person who needs it most: oneself.

Other Stuff
During a routine inspection of our various gas appliances we found that the shrine room heaters have developed a problem. Regular Monday and Friday evening meditators will have no doubt experienced the popping sounds emitted from the heaters when they are on (which you may say is not often enough!). Well, it seems the steel of the main heat exchangers has begun to split, and so these parts need replacing before we can use them again. And unfortunately just today we discovered that the same has also happened to Luangpor’s kuti heater. John, our friendly local gas engineer, is on the case.