Two Saturdays ago Luangpor paid a visit to the The Orchard, a charming retreat centre situated just this side of the Welsh border in Herefordshire. Eighteen people gathered there for a day retreat, and he was invited to join them for the latter half, leading a short meditation, giving a Dhamma Talk, and answering questions. It was a very pleasant afternoon. Many thanks to Ad for organising it.
.
Last Saturday we made room for the large and devoted Win family, who came to remember the late U Nay Win and make offerings. Mr Win had been a very great supporter of this place since the early days, and Luangpor has many a vivid memory of him, particularly from the time when the pagoda was being built almost three decades ago.

After the meal Luangpor gave the Wins a Dhamma talk, speaking among other things of the need to support one another as we navigate these unforgiving seas of birth, suffering, ageing and death. And as a number of medical doctors were present, Luangpor took the opportunity to remind them that, just like medicine, the Dhamma should be taken and used, not just placed on a shelf and revered.

On the Sunday Khun Peter and a coach of 70 Thais came for their monthly gathering. It was the usual happy mix of precept taking, giving, eating, meditation and Dhamma Talks. The weather was fortunately excellent, and so we were able to do an alms-round outside. Please remember that these events are open to all.

Khun Peter is sponsoring next month’s robe offering ceremony which marks the end of the Rains Retreat. This will take place on Sunday 1st November, from 10 am.

On the full moon day marking the passing of the second month of the Rains Retreat, Luangpor read ‘Understanding Vinaya‘ from a book of Ajahn Chah’s teachings. It contains a classic mix of straight talking, practical and sometimes humourous instruction given to monks and novices. In part of it Ajahn Chah recounts his own early experience of progressing from information overload as a result of too much studying, to a simpler, more direct approach to practice. And he also speaks about overcoming the hindrance of doubt – not by shunning it or fighting it, but by observing and investigating it so that one can understand its nature.
.
Last week Ajahn Manapo took another school assembly, this time at St. Gregory’s RC Primary School in Stratford. The formula of these assemblies is usually much the same, but the responses from the children are certainly not. During the Q & A section at the end, Ajahn Manapo spoke about the monks’ rules, including the one about not using money. ‘If you’re not allowed money, where do you get your food from?’ asked one little boy. ‘People give us our food,’ Ajahn Manapo replied, before adding: ‘And do you know what we give in return? Have I given you anything today?’ Without hesitating, the young boy replied: ‘You’ve given us happiness.’
.
Inspired by this response, in his Dhamma talk on the following Monday, Ajahn Manapo spoke about the reciprocal nature of the relationship between the Sangha and the laity, which is based on an Economy of Gifts, as Ajahn Thanissaro puts it. Recalling the Sangha’s role as the nurse that helps administer the medicine of Dhamma, Ajahn Manapo reminded everyone of the Buddha’s famous injunction to his first 60 enlightened monks, telling them each to wander forth to teach the Dhamma, no two in the same direction: ‘Go now, monks, for the good of the many, for the happiness of the many, out of compassion for the world.’
. 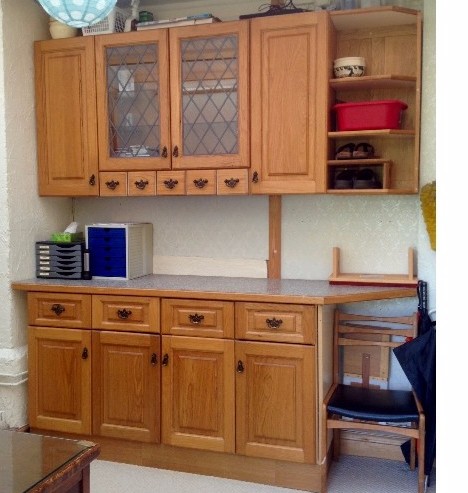 We’ve finally got round to re-using some of the old kitchen units from the recently refurbished Wood Cottage kitchen. As you can see from the photo, we now have a much-improved office area in the back porch and lots of cupboards to lose things in…
,
We have also had a new gas heater installed in the small shrine room, and the electric Aga has been woken from its summer hibernation. The Aga – which someone very kindly donated last year – is charged during the night on the Economy 7 tariff, and works out quite a bit less expensive to run than our old oil-fired Aga.
, 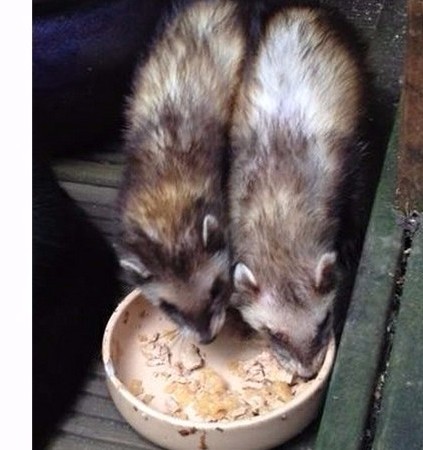 Buddhist monasteries are often refuges not only for suffering humans, but animals, too, and this one is no different. Adding to our menagerie of rescue dogs, cats, a tortoise and a cockerel, we now have a couple of ferrets. They’re young, healthy and tame – and so have most likely been dumped. They found their way here and it looks as though they’d quite like to stay.
,
And finally, if there are any friendly lawyers or solicitors out there who would be willing to give us advice concerning various matters (for instance, we are considering changing the status of our charity in order to switch banks), we’d be very grateful if you got in touch.