It’s now thirty years since this humble pair of old gamekeepers’ cottages began their transformation into Warwickshire’s first and only Buddhist monastery. Immediately after the Rains Retreat of 1985 Luangpor, accompanied by his dog, Toby, arrived here and set about establishing Wat Pah Santidhamma (the Peaceful Forest Monastery), better known as the Forest Hermitage. 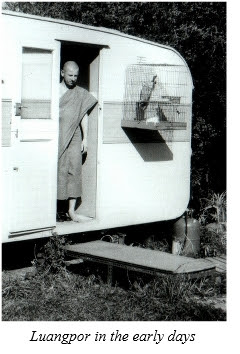 Three decades later it would appear that not a great deal has changed. It’s still a small, unassuming place tucked away amid forest and fields, and Luangpor continues to have a trusty pooch at his side, only these days it’s Jimmy.

Now many of you know that, though the Hermitage is certainly quiet, and nicely secluded from the crowds, it is actually a little powerhouse of Buddhist activity. With Luangpor’s prison work (Angulimala is also thirty this year), Ajahn Manapo’s involvement with local schools, the twice weekly public sittings, monthly retreats, the Sunday school, the Warwick Uni Buddhist Group, and various other projects, the Forest Hermitage contributes much more than its small stature might indicate.

So thank you, Luangpor, for creating this place and enabling so many people to benefit from the Buddha’s Teachings. And thank you also to everybody who has supported him and all that goes on here along the way. May the Forest Hermitage and all it stands for continue to blossom in the Heart of England for many years to come!

Such a significant milestone couldn’t be passed without a good old birthday party. On the 1st November about 300 people gathered here to celebrate thirty years and to mark the end of this year’s Vassa (Rains Retreat). 300 is a record for us, and fortunately (or unfortunately, if you’re concerned about global warming) the weather was clear and mild. (Frozen festival-goers, it would seem, are a thing of the past.).

Khun Peter and Co. sponsored this year’s robe offering (we didn’t have a kathina as for this to happen you need to have had at least five monks in residence during the retreat). He also provided vast quantities of hot, vegetarian Thai cuisine. One coach came loaded with students from Warwick Uni, and another with supporters from London. Many other people arrived in cars, bearing dishes of food and bags of supplies for the monastery stores.

Dancing girls and Thai boxing were, as usual, not on the program, and instead everyone was treated to the tried and tested practices of virtue (taking the five precepts), generosity (offering food to the monks), and mental development (meditating and listening to Dhamma talks).

Waiting to offer food to the Sangha
.

As is tradition in our family of forest monasteries at this time of year, each Sangha member was invited to give a Dhamma talk. Luangpor reminded us that the conclusion of the Vassa is a time to focus on the importance of the Sangha – the order of monks and nuns. He then moved on to talk about external vs. internal cleanliness; most of us, he said, might be clean on the outside, but inside is often a different matter, what with all the greed, anger and delusion swirling around. The Dhamma, he pointed out, is aimed precisely at cleaning up this inner mess.

Ajahn Manapo recounted a favourite sutta where the Buddha compares the relative merits of giving, keeping the precepts, developing loving-kindness, and gaining deep insight into impermanence. The latter, the Buddha said, surpasses all. Ajahn Manapo finished with a little story which illustrated how the contemplation of our own impermanence (i.e. the fact that we will die) puts everything in perspective.

And then we held our collective breath as Sister Bodhi, our newly ordained Italian nun, took the mic and gave her First Ever Dhamma Talk. If she hadn’t admitted in her opening sentence that she was terrified you would never have known. But she quite rightly went on to point out that it was her practice to attempt to observe and understand this state of mind, and not be swallowed up by it.

All in all it was a very successful day. To commemorate the occasion we gave away our 2016 calendar as well as a small postcard with the two photos of Luangpor plus pooches, past and present. If you’d like copies yourself we can send them to you, or you can pick them up when you’re next here.

Just last Sunday Luangpor journeyed down to Amaravati, near Hemel Hempstead, for their Royal Kathina. As a Chao Khun he was asked by Ajahn Amaro (pictured with Luangpor in the left-hand picture below) to offer the blessing to the King of Thailand. Afterwards he gave a Dhamma talk in the large meeting hall, using the opportunity to speak to the lay people of the importance of supporting the Sangha. He also touched on both the recent attacks in Paris and the Coventry bombings of 75 years ago, saying that the Buddhist response to violence should be rooted in reconciliation and loving-kindness.

With Autumn comes a new academic year at Warwick University. During the summer Luangpor agreed to the Buddhist Society’s request to hold an extra weekly session, and so as well as the long-standing Monday meetings, students can now attend the new Thursday session, which is led by Ajahn Manapo. So far both nights have been well attended, with numbers generally ranging from between twenty and forty students. Please remember that these evenings are not only for students but are open to all. They take place every Monday and Thursday, from 6:30 – 8 pm.

This weekend Ajahn Manapo will be at Bhavana Dhamma leading a retreat, the penultimate one of the year. The Kumarasinges have very kindly offered to cook and serve the food. And on Saturday the 28th Luangpor will welcome Buddhist prison chaplains from across the country for Angulimala’s last workshop of 2015.