In the forest monasteries of our tradition, January means one thing: the annual Ajahn Chah memorial celebration. On the 16th of this month, when it will have been 25 years since he passed away, Wat Pah Pong will host a gathering of thousands – perhaps even tens of thousands – of monks, nuns and lay-people as they remember the great man and his legacy.

Because of this, both Luangpor and Ajahn Manapo will be away in Thailand for most of the month. Ajahn Manapo flies out this evening, having a bit of time to himself before he receives Luangpor at Wat Pah Nanachat on the 14th. After a week or so in the Northeast they will fly over to Mandalay in neighboring Burma, from where they hope to catch a boat to Bagan. A visit to Yangon, and specifically the magnificent Shwedagon Pagoda, will conclude their Burmese excursion. 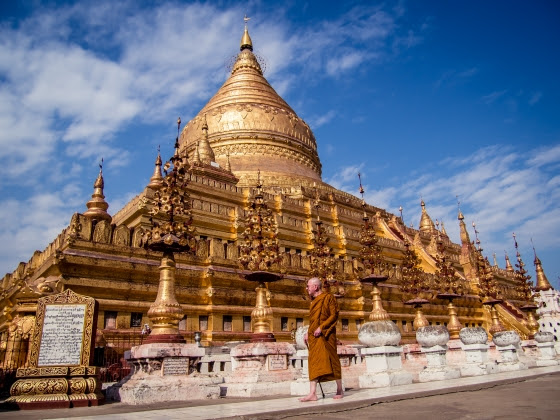 After Burma they’ll have a couple of days in Cha-am, in Southern Thailand, before Ajahn Manapo heads back to the UK on the 31st. On the 4th February Luangpor will zip over to Korat for a couple of nights at Wat Pah Rattanawan, the rather well-appointed monastery of Ajahn Nyanadhammo, where there will be a sima dedication ceremony. Luangpor will land back on British soil (or London tarmac) on the 6th.

Ajahn Cittagutto, a German monk who ordained here in 1992 and who normally stays in the north of Thailand, has very kindly offered to hold the reigns (and Jimmy’s dog lead) while they’re away. The Monday and Friday meditation evenings will thus continue as normal, as will the Warwick Uni Buddhist Society’s Monday meetings.

The last few months have, as usual, seen their fair share of prison- and school-related activities. Luangpor led two Angulimala workshops, handing out the ever-popular Angulimala calendars in the December meeting, and clocked up countless miles visiting both local and distant prisons, including trips to Portland and Doncaster.

A perennial challenge that faces Luangpor in his work is the need to recruit new prison chaplains. The difficulty is compounded by the fact that many of those who apply are unwilling to keep the fifth precept properly – a precept which is of the utmost importance when you are trying to help men and women who for the most part have serious alcohol and drug-related problems, and who are often behind bars because of misusing those substances. 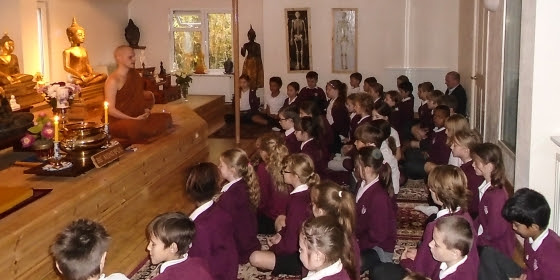 Children from All Saints’ School in Warwick meditating in the Shrine Room.

Ajahn Manapo has been kept relatively busy with not only school visits, but local cub and scout groups, too. As usual, the meditation was a real hit, with one girl at Balsall Common’s Heart of England School remarking, after a few minutes of focussing on her breath, ‘I feel like I’ve just been on holiday and come back home.’

The End of Vassa celebration came and went in mid-October, and because of the passing of His Majesty King Bhumipol only a few days before, it also served as a memorial for the widely-adored late Thai King. Several retreats have also taken place at Bhavana Dhamma since our last newsletter, the most recent of which finished just yesterday as twelve retreatants spent the final three days of 2016 and the first two days of 2017 in silent meditation.

End of Vassa gathering on the 16th October

Of course, the highlight of that retreat was joining in with the New Year’s Eve celebration at the Hermitage. Unfortunately, Ajahn Cittagutto’s flight from Germany on the 31st was cancelled because of London fog, and so he wasn’t able to lend his voice to the midnight chanting. But it was still a singularly uplifting occasion: it’s not often you get a room of thirty people celebrating the beginning of a new year in meditative silence and without the assistance of intoxicants. If only more would follow our example!

Going back to the subject of retreats at Bhavana Dhamma, the schedule for 2017 is now online. Bookings open three months before the start date of each retreat, unless you’ve attended one before – then you can book at any time.

These retreats could not function without the support of people like you, and we are particularly grateful to Benyapa for her unwavering service in the kitchen, and to Emma for helping to maintain the house and garden. We are also indebted to the many people who have provided food over the last year, including Kanlaya, Sarah, Anne, Nawaporn, Priya, Trish, Donna, Fon and Matthew.

As with any old building, the maintenance and improvement of the Hermitage is an ongoing project. We are lucky to have Andy at the helm, who is not only a peerless builder (the term builder really doesn’t do him justice) but also a great friend. Thanks to him the installation of the new windows is 99% complete – there’s just one little bit of finishing off to do, but as it involves a brittle phone line and thus the cooperation of BT we are not optimistic that it will be accomplished any time this century… Once again, a big thank you to Noi, Pen and Oi for sponsoring the windows.

We have also been in talks with Andy about our roof, which is in quite a dilapidated state. It is our intention to replace it later in the year, installing a ‘warm roof’ in its place. It’ll be a massive job, but we haven’t got much choice, and the new so-called ‘warm roof’ will make a substantial difference to the building’s insulation properties.

That’s it from us for now. We at the Hermitage and Bhavana Dhamma wish you all a Very Happy New Year. May you continue to grow in virtue, wisdom and peace of mind. Hopefully we’ll see you here in the not-too distant future.