Despite our most earnest pleas, the rain that has been absent for six weeks could not wait for another day, and the morning of our Asalha Puja and Entry to the Vassa celebration dawned mighty wet and windy. The new marquee just about withstood the gales (though extra guy ropes had to be fixed as the festival went on inside), but our food tents weren’t so lucky – falling victim to some wild gusts a couple of hours before festival-goers arrived – and so we had to make some last minute adjustments to the plan and set up the food tables in the garage.

Apart from all that, we had a very successful day, with the rain holding off as we did our circumambulation around Bhavana Dhamma, and we’re grateful to everyone for their help, kindness and tremendous generosity. Anumodana!

A wet and wild Asalha Puja

As you can see from a couple of the photos above, the Forest Hermitage Sangha has a new member. Anagarika Ross, who has been with us for just over a year, requested the Going Forth as a samanera (novice monk) last Friday, on Asalha Puja itself. He was accepted into the fold and given the name Cittapemo.

This special event reminds us that Asalha Puja is not just a celebration of the Buddha’s First Discourse, but also of the establishment of the Sangha – the order of monks and nuns – as it was on that occasion when Kondanna went forth as the first Buddhist monk. 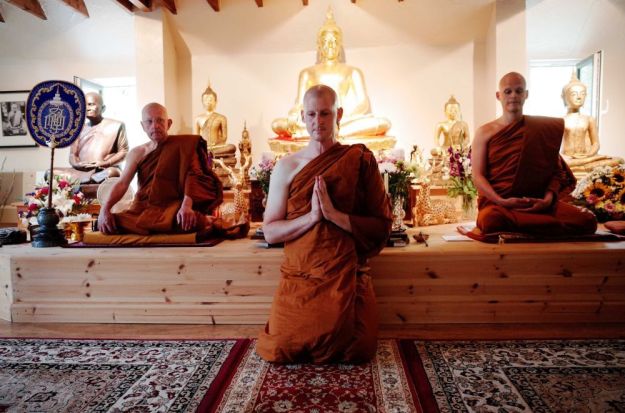 Two weeks ago, on the 17th July, Luangpor celebrated his 74th birthday. On the Monday we went to Khun Ting’s restaurant in Nottingham for a meal invitation. Luangpor led a blessing before receiving food and giving a short Dhamma talk. And, on the day itself, a small crowd of close supporters came to offer the meal and wish him well. A lot of time and effort had obviously been taken to produce a number of magnificent birthday cakes, as you can see…

Luangpor is a lover of tortoises – both inanimate and real…

Ajahn Manapo led the retreat at Bhavana Dhamma on the weekend before last. Thank you to everyone who supported it, especially Benyapa, Kanlaya, Khun Ting, Lassanta and Sarah. The August six-day retreat will begin on the 11th, and if anyone would like to help clean and tidy the Bhavana Dhamma house and garden towards the end of next week, please let us know.

Regarding cancellations, if you have a place on a retreat and need to cancel, please give us as much notice as possible so that the space can be offered to someone else. Unfortunately we had six cancellations before the last retreat and because most of them were very last minute we weren’t able to fill the spaces. We realise that sometimes this can’t be helped, but please bear it in mind. Spaces are few and therefore precious!

Tomorrow, Luangpor, accompanied by Ajahn Manapo, will be off to Wat Buddhapadipa in Wimbledon to pay his respects to the Abbot, who is the most senior Theravada monk in the country. It’ll be a brief visit as Luangpor needs to be in Ryehill prison, on the outskirts of Rugby, by the early evening.

We are still looking for a long-term volunteer driver for Luangpor to take him on his prison visits, so please do contact us if you, or anyone else that you know, are interested.